skip to main | skip to sidebar

So, about 9 months after I learned to knit I took a class to learn how to make a sweater. It is a pattern that looks like the Debbie Bliss Lara pattern. I loved the sample. One of the suggested yarns was Debbie Bliss Cashmerino Aran. The yarn is absolutely gorgeous. And sooooo expensive. I took the plunge and went for it. I purchased the appropriate number (16, I think) of skeins in a beautiful royal purple and went on my merry way.
Problem #1: The class was weekly for 4 weeks. During the class I was away for just over a week on vacation and get really behind in knitting and in understanding the pattern. At the last class some people were completely done and came to class wearing their sweaters. Most were seaming up during the class. But I was still knitting away.
Problem #2: Gauge. Well, I was a very, very loose knitter when I started knitting, Now I am a loose knitter. I really wished the teacher paid better attention to how far off my gauge was because I clearly didn't understand. I knew I was knitting a little loose and was ok with it because I was a little bigger than the largest size. I just figured it would make a sweater a little bigger and I would be fine. Little did I know! Also, I was going to run out of yarn and I had bought literally all of the yarn that the yarn shop had. Luckily, a very nice member of the class picked up 5 more skeins for me at another lys near her work. I hoped that the different dye lots wouldn't matter too much. Somebody say something about a river in Egypt?
At some point I put the sweater down. I think I was confused by the directions and was afraid of making a mistake. (ha!) I knew how nice (and expensive) this yarn was and I really wanted a sweater I would be proud of.
About two years later I picked it back up and brought it to the free knitting help night and was able to re-start. It was at that point that I realized how different my gauge was from how I use to knit to how I now knit. I knit on it for a little while and put it back down again.
Finally, a month or so ago I picked it back up again. Four years after when I first started it. Of course, I noticed the gauge issue and the size issue. Also, I had also lost weight since I started it. I really didn't have much left to do on it. I finished the right front and back, then the shoulder, then the right arm. I weaved in the remaining ends, gave it a bath, and laid it out to dry on the guest bed. I tried to stretch the side with the tighter gauge and tried not to stretch the side with the looser gauge. I stepped back, checked out my just finished sweater, and realized this things is HUGE!!!!!
I checked on it the next morning and am sad to say it didn't shrink up at all while it dried. I then ignored it for about a week while trying to get over my disappointment. I seamed it up and didn't want to try it on. I finally mustered up my nerve and faced the inevitable. Yup, it was huge. It hung to my knees and I had to cuff the sleeves about five inches.
So, now I have the softest, most beautiful, most expensive bathrobe I never knew I wanted. I do use it all the time. Most evenings I wear it over my pjs while relaxing on the couch knitting and watching tv. I know I get more use out of it as a bathrobe then I ever would as a sweater. So, it isn't a completely sad ending. But, oh man, I have I learned a whole lot about knitting in the past four years!
I do like this pattern and will probably try making it again. I would go down several needle sizes and make a gauge swatch. I also think a heartier yarn would make a denser fabric. Maybe a 100% wool would be better. While looking through project notes on Ravelry a lot of people have said that the sizing runs big and the yarn pills. Good to know. The construction is awesome. It starts with the left cuff and ends with right cuff. It is all knit in one piece with 2 seams--from the cuff up the inside of the arm to the arm pit and down the side of the body to the waist.
What was that? Pictures? You want to see pictures of the finished object? Well, I still have not brought myself to taking pictures of it. It is not at all flattering on me. Ya know, like a bathrobe.
Posted by knittingknirvana at 8:20 AM 1 comment:

I saw an interesting thread on the Stash and Burn Ravelry group this morning. It pertains to how much we knit or crochet per year, and then how long it would take to knit up stash. The easy way to figure out yardage of knitting per year is by finished objects. So, obviously you could start a project one year and finish it another year. So it isn't a completely accurate formula, but kind of fun to figure out.
In 2007 I knit approximately 2000 yards.
In 2008 I knit 2373 yards.
So far in 2009 I have knit 7344 yards.
I have knit far more this year. I started and completed a sweater for me and a sweater for London. Also, I had started a sweater for each of us in previous years and finished them this year so that skews the numbers. I don't bother with the yardage on the appliques on the Itty Bitty Hats. That would probably add up if I counted it all, but it seems tedious to figure all of that out. Also, I'm looking at it as yarn I am using as opposed to actual stitches---because there are many times I rip back and re-knit.
I have been on a big finishing binge this year, so a lot of yardage is counting towards this year even though I actually knit the bulk of it in previous years. Anyhow, I thought it was pretty interesting to really think about how much yarn I am actually using.
Posted by knittingknirvana at 8:51 AM No comments: 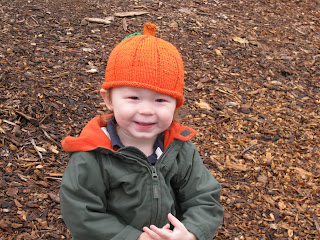 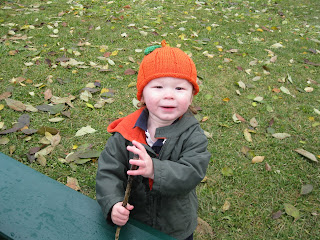 The pattern is Little Pumpkin Hat by Susan B. Anderson. I used Tahki Cotton Classic from my stash. Super easy pattern from the Itty Bitty Hats book. This is part of the KAL I am doing to knit every hat in the book. See the list in the sidebar? I think I am doing pretty well!! :)
Posted by knittingknirvana at 11:06 AM 2 comments:

I also write articles. Come check them out!

Cookie jar for your tips. Thanks for your support!

My Works In Progress